Against All Odds Wiki
Register
Don't have an account?
Sign In
Advertisement
in: Countries, League of Nations, North America,
and 2 more

Edit
watch 01:36
We're Getting Mutants in the MCU - The Loop
Do you like this video?
Play Sound

Workers of the World, Unite! 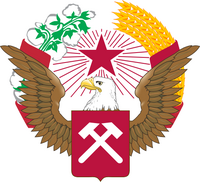 The Union of American People's Republics, often abbreviated to UAPR or America, is a constitutionally socialist state ruled as a single-party state by the American Communist Party with its capital in Washington City. A union of 10 subnational People's Republics, in practice the UAPR is highly centralized. The country is situated mostly in central North America, where its eight contiguous republics and Washington City District, the capital district, lie between the Pacific and Atlantic Oceans, bordered by Canada to the north and Mexico to the south. The People's Republic of Alaska is in the northwest of the continent, with Canada to the east and the Soviet Union to the west across the Bering Strait, and the People's Republic of Transpacifica consists of several territories in the Pacific.

The UAPR has its roots in the American Revolution of 1933, which deposed the previous government. The Communist Party of the USA, led by Earl Browder, fought a civil war in which the Communist Faction later captured most territories and seized power. In 1934, the victorious Communist Faction formed the UAPR with the merger of several republics, establishing the state doctrine of Marxism–Leninism and initiating a centralised planned economy. As a result, the country underwent a period of rapid industrialisation and collectivisation which laid the basis for its later war effort and dominance after World War II. However, Browder committed mass repression against elements of the population through his authoritarian rule.

During World War II, Japan attacked the UAPR on February 27th 1942, causing America to join the Pacific Theater. Having played an important role in victory in the Pacific, the UAPR consequently occupied much of East Asia and emerged as one of the world's two superpowers after the war. Together with these new communist satellite states, through which it established economic and military pacts, it became involved in the Cold War, a prolonged ideological and political struggle against the other superpower, the British Empire.

During the Cold War, the UAPR supported Communist revolutions in other countries. Through these means, the UAPR came to dominate much of Latin America.

A de-Browderisation period followed Browder's death, reducing the harshest aspects of society. The UAPR initiated significant technological achievements of the 20th century. The UAPR remains a leading world power, second only to the British Empire. It is a permanent member of the League of Nations Executive Council, a recognized Nuclear Weapons State and the de facto leader of the Wake Island Association.

The UAPR is a federal union of ten republics, although the rule of the highly centralized Communist Party makes the union merely nominal. Theoretically, the republics have a wide range of powers, including the right to unilaterally secede from the union, but the use of these powers is, for the most part, directed entirely by the federal government. The republics compose the vast bulk of the UAPR's land mass; the other area considered an integral part of the country is the Washington City District, the federal district where the capital, Washington, is located.

The territory encompassed by a republic does not always correspond to the region which historically bore the same name. The People's Republic of New England, for example, includes the territories of the former US states of New York, New Jersey, Pennsylvania and Delaware, which were not traditionally considered part of the New England region.

Community content is available under CC-BY-SA unless otherwise noted.
Advertisement