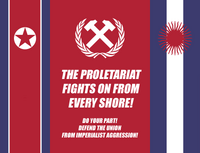 The Wake Island Association, abbreviated WIA, is a mutual defense treaty between the communist states in the American sphere of influence. The founding treaty was signed on the American territory of Wake Island on 14 May, 1955, under influence from the UAPR as a response to the growing Allied Pact. Most WIA forces are deployed along the Iron Curtain between America and Canada, with smaller forces in counter-insurgency or on other Allied Pact borders.

Though not as active as its counterpart, the Wake Island Association has covertly aided communist revolutionaries in several countries, and initially supported the People's Republic of Indonesia in the Indonesian Civil War.

The Wake Island Association has added members occasionally since its formation. It includes many but not all of the world's communist or socialist states.

Retrieved from "https://againstallodds.fandom.com/wiki/Wake_Island_Association?oldid=17011"
Community content is available under CC-BY-SA unless otherwise noted.